Performance learning had been discussed. But we have not used it in any neural network. In this post, we talk about an important application of performance learning. And this new neural network was invented by Frank Widrow and his graduate student Marcian Hoff in 1960. It was almost the same time as Perceptron was developed which had been discussed in ‘Perceptron Learning Rule’.

It is called Widrow-Hoff Learning. This is an approximate steepest descent algorithm. And the performance index used in the learning rule is mean square error.

ADALINE (Adaptive LInear NEuron) and a learning rule called LMS(Least Mean Square) algorithm were introduced in the paper ‘Adaptive switching circuits’. The only distinction between perceptron and ADALINE is only the transfer function which in perceptron is a hard-limiting but in ADALINE is linear. And they have the same inherent limitation: they can only deal with the linear separable problem.

And the learning rule LMS algorithm is more powerful than the perceptron learning rule. The perceptron learning algorithm always gives a decision boundary through a training point(a sample of the training set)or near a training point as we have talked about in ‘Perceptron Learning Rule’. So this classification is not strong enough, and LMS can fix this problem. LMS had great success in signal processing but it did not work well in adapting the algorithm to the multilayer network. Backpropagation is a descendant of the LMS algorithm.

It’s an abbreviated notation of ADALINE network is; 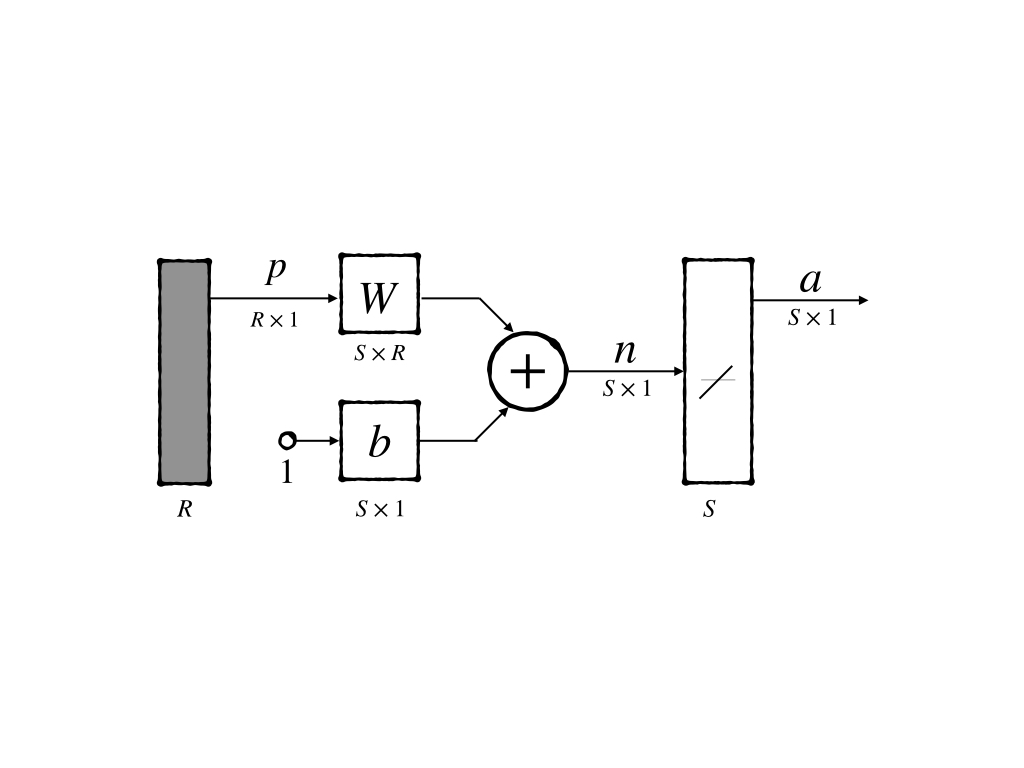 This is already a simple model, but we would like to use a more simplified model: a neuron with 2-inputs. Its abbreviated notation is: 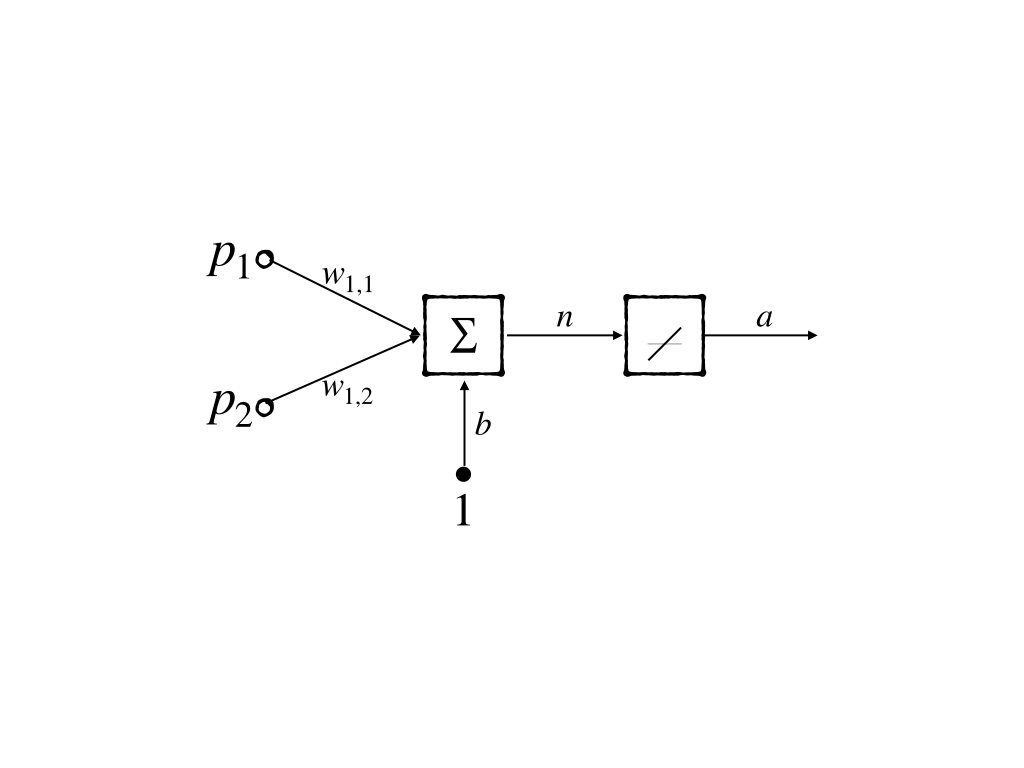 whose mathematical notation is:

and decision boundary of this 2-input neuron is: 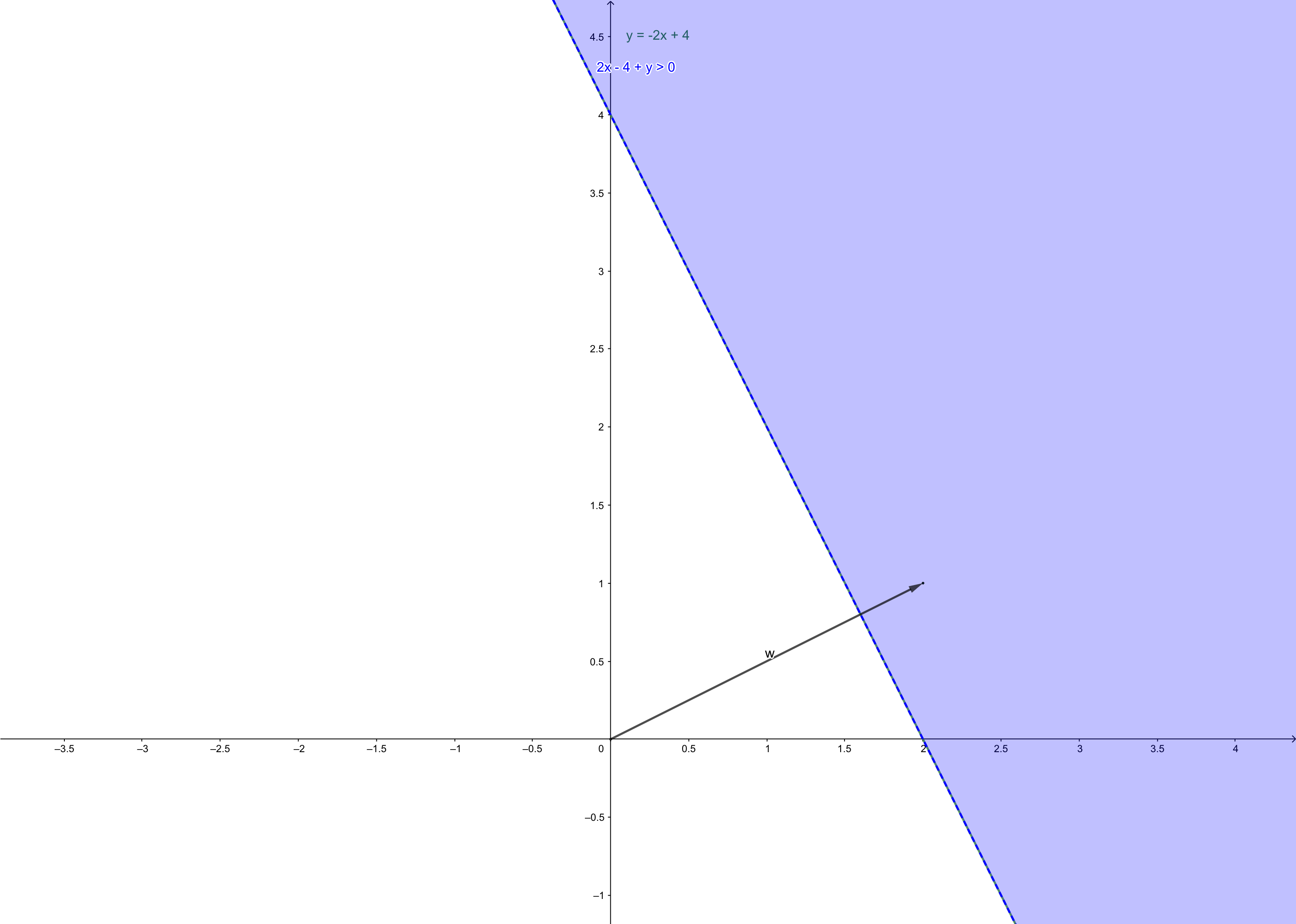 This is the simplest ADALINE neural network architecture, and then we would like to investigate ‘how to modify its parameter’ - its learning rule.

LMS is a kind of supervised learning algorithm and it needs a training set:

The information used in LMS is the mean square error(MSE), which is the difference between output and target. This is the performance index of the ADALINE neural network.

To make the calculating process more beautiful, we lump the parameters up including bias into:

and input lump up respectively:

\(\mathbf{x}\) is used to refer to as a parameter to make it successive with the posts about performance optimization(‘Performance Surfaces and Optimum Points’) and equation(1) became:

where the symbol \(\mathbb{E}\) is the expectation(or average of a certain training set). Average is also called mean and the mean of the square of error so it is called MSE.

where \(\mathbf{x}\) and \(t\) is not a random variable so its expectation is itself. And equation(8) can be simplified as

equation(9) is a ‘quadratic function’. and we can rewrite it in the form:

And finally, we get the minimum point of MSE:

LMS is the short for least mean square. And it is the algorithm for searching the minimum of the performance index.

When \(\mathbf{h}\) and \(R\) are known, stationary points can be found directly. If \(R^{-1}\) is impossible to calculate we can use ‘steepest descent algorithm’. However, in common both \(\mathbf{h}\) and \(R\) are unknown or are not convenient to be calculated. We would use the approximate steepest descent in which we use an estimated gradient.

And we also instead expectation of square error with a squared error:

and the approximation of gradient is:

This is the key point of the algorithm and it is also known as ‘stochastic gradient’. And when this approximation is used in a gradient descent algorithm it is referred to as

which means parameters are updated as each input reaches.

now we consider \(\frac{\partial e(k)}{\partial w_{1,j}}\) whose error is the difference between the output of ADALINE neuron with \(R\) weights and target:

Then we take the approximation of \(\nabla F\) into the steepest descent algorithm:

This is an LMS algorithm which is also known as the delta rule and Widrow-Hoff Learning algorithm. For multiple neuron neural networks, we have a matrix form:

We have analyzed the convergence of the steepest descent algorithm, when

The update procedure of LMS is:

The expectation of both sides of equation(24):

and this can also be written as:

equation(30) is equivalent to:

Under this condition, when the system becomes stable, we would have:

Equation(33) shows that the LMS solution which is generated by each incoming input from time to time would finally give a convergence solution.