We are not able to build any artificial cells up to now. It seems impossible to build a neuron network through biological materials manually, either. To investigate the ability of neurons we have built mathematical models of the neuron. These models have been assigned a number of neuron-like properties. However, there must be a balance between the number of properties contained by the mathematical models and the current computational abilities of the machines.

From now on, we begin our study of the neuron network, and it looks like a good idea, to begin with, the simplest but basic model – artificial neuron. Because tons of network architectures are built on these simple neurons.

Let’s begin with the simplest neuron, which has only one input, one synapse which is represented by weight, a bias, a threshold operation which is expressed by a transfer function, and an output.

We know that the cell body of neurons plays summation and threshold operation. This is very like a linear classifier

Then our simplest model is constructed as follows:

The threshold function is called an active function or transfer functions officially. And it will be listed in the next section.

Let’s review the single input neuron model and its components: 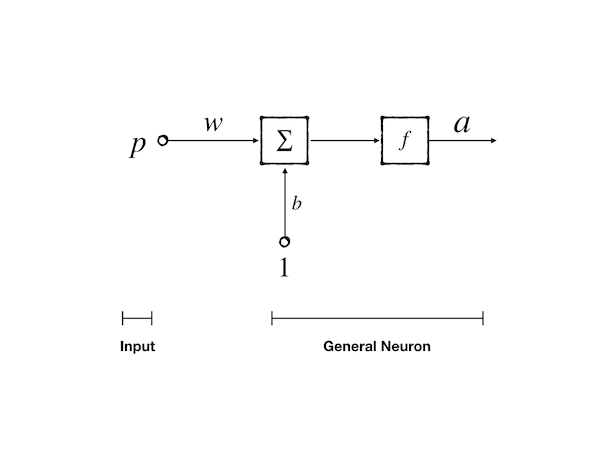 The final mathematical expression is:

however, bias can be omitted, or be rewritten as a special input and weight combination:

\(w\) and \(b\) came from equation(1). In the model, \(w\) and \(b\) are adjustable. And the ideal procedure is: 1. computing summation of all weighted inputs 2. select a transfer function 3. put the result of step 1 into the selected function from step 2 and get a final output of the neuron 4. using the learning rule to adjust \(w\) and \(b\) to adapt the task which is our purpose.

Every part of the neuron no matter the biological or mathematical one directly affects the function of the neuron. And this also makes the design of neurons more interesting, because we can build different kinds of neurons to simulate different kinds of operations. And this also provides sufficient basic blocks for us to develop a more complicated network.

Let’s recall the single input model above, the components are \(w\), \(b\), \(\sum\), and \(f\), however, \(w\) and \(b\) are objectives of learning, and \(\sum\) is relatively stable which is hard to be replaced by any other operations. So, we move our attention to the threshold operation-\(f\). Threshold operation is like a switch that when some conditions are achieved produces a special output. But when the conditions are not reached, it gives another output. A simple mathematical equation to express this function is:

Transfer functions can be linear or nonlinear; the Following three functions are mostly used.

The first commonly used threshold function is the most intuitive one, a piecewise function, when \(x>0\) the output is ‘on’ or ‘off’ for others. And by convention, ‘on’ is replaced by \(1\) and ‘off’ is replaced by \(-1\). So it becomes: 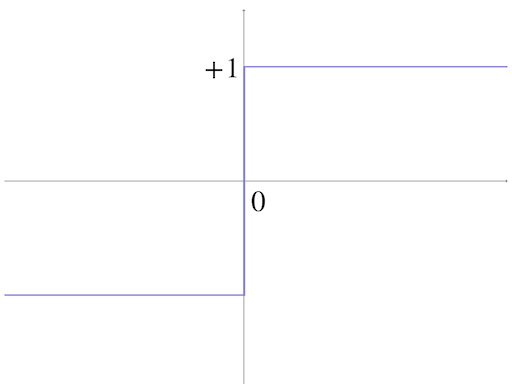 We always regard the input as an independent variable so we replace \(P\) with \(x\) without loss of generality. Then we get: 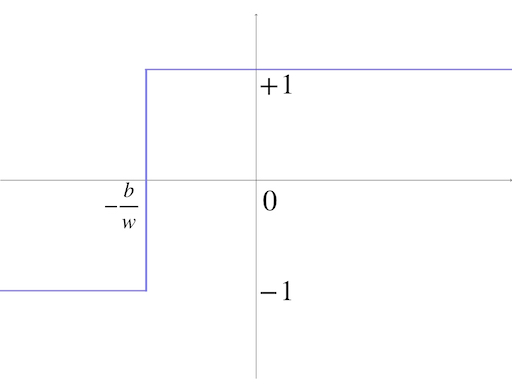 This is the famous threshold operation function, the Hard Limit Transfer Function

Another mostly used function is the linear function, which has the simplest form:

and it is a line going through the origin 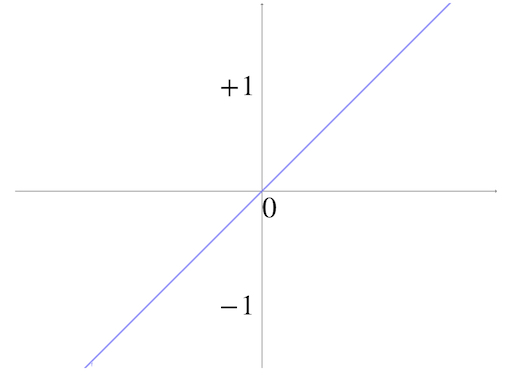 When tale equation(1) into equation(8) we get:

and we can get the special case of the linear transfer function for the single-input neuron: 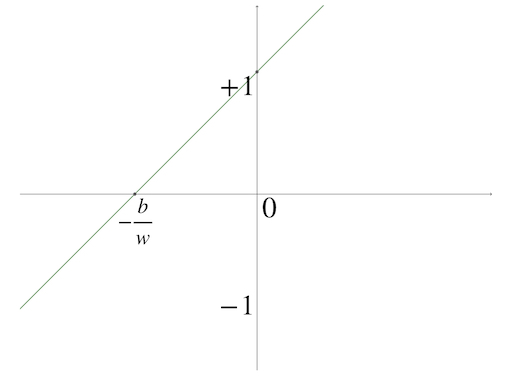 Another useful transfer function is the log-sigmoid function: 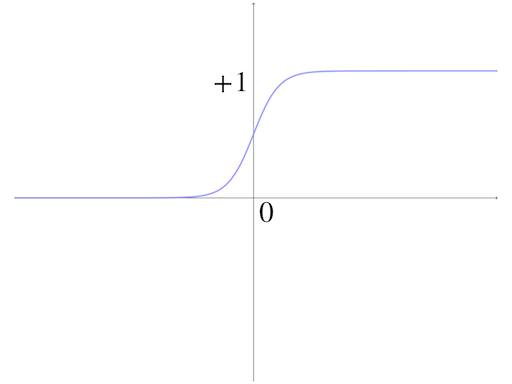 This sigmoid function has a similar appearance to the ‘Hard Limit Transfer Function’ however, the sigmoid has a more mathematical advantage than the hard limit transfer function, like it has derivative everywhere while equation(5) does not.

The single-input neuron model’s special case of the log-sigmoid function is: 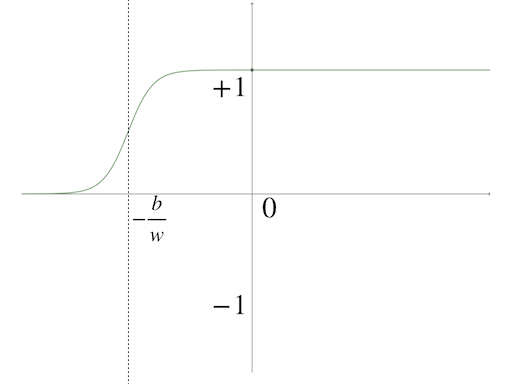 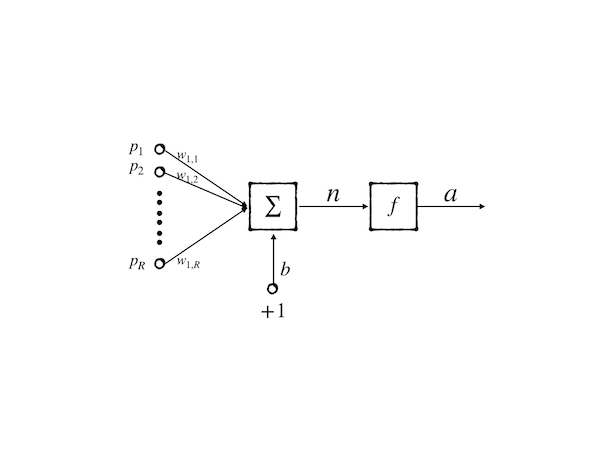 then, the mathematical expression is:

There are two numbers of subscript of \(w\) which seem unnecessary in the equation because the first number does not vary anymore. But as a long concern, it is better to remain this number for it is used to label the neuron. So \(w_{1,2}\) represents the second synapse’s weight belonging to the first neuron. When we have \(k\) neurons the \(m\)th synapse weight of \(n\)th neuron is \(w_{n,m}\).

Let’s go back to the equation(13). It can be rewritten as:

where: - \(W\) is a matrix that has only one row containing the weights - \(\mathbf{p}\) is a vector representing inputs - \(b\) is a scalar representing bias - \(n\) is the result of the cell body operation,

then the output is:

The diagram is a very powerful tool to express a neuron or a network because it’s good at showing the topological structure of the network. And for further research, an abbreviated notation had been designed. To the multiple-inputs neuron, we have: 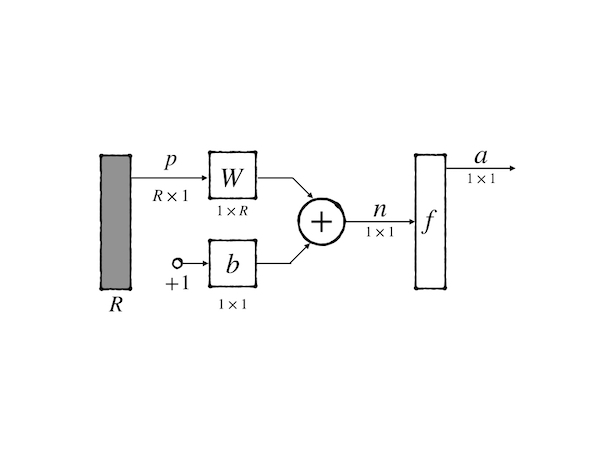 a feature of this kind of notation is that the dimensions of each variable are labeled and the input dimension \(R\) is decided by the designer.

A single neuron is not sufficient, even though it has multiple inputs.

A layer of neurons#

To perform a more complicated function, we need more than one neuron and construct a network that contains a layer of neurons: 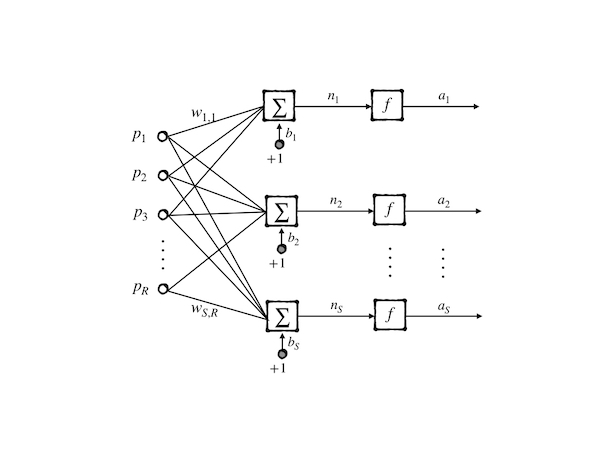 This network is much more powerful than the single neuron but they have a very similar abbreviated notation: 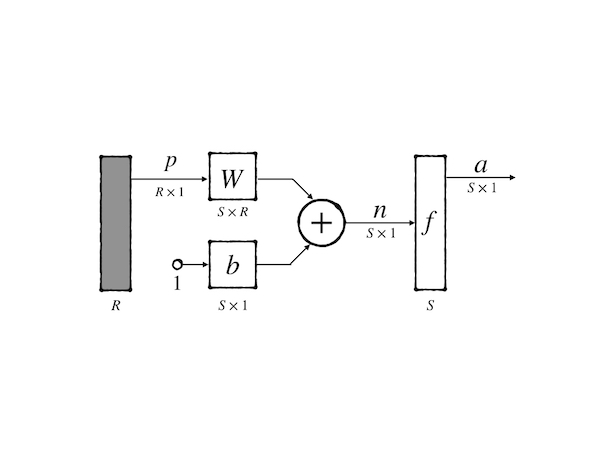 the only distinction is the dimension of each variable.

The next stage of extending a single-layer network is multiple layers: 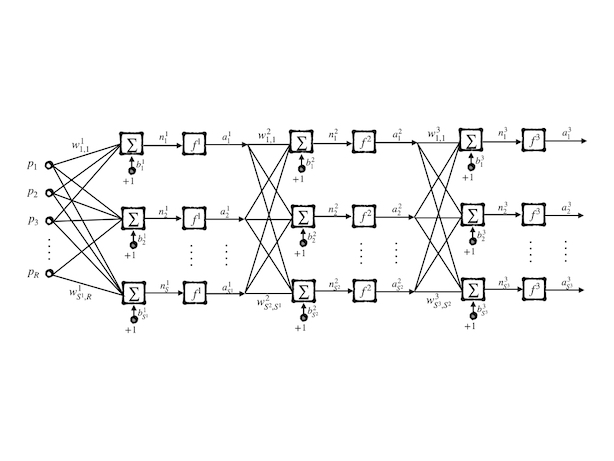 and, its final output is: 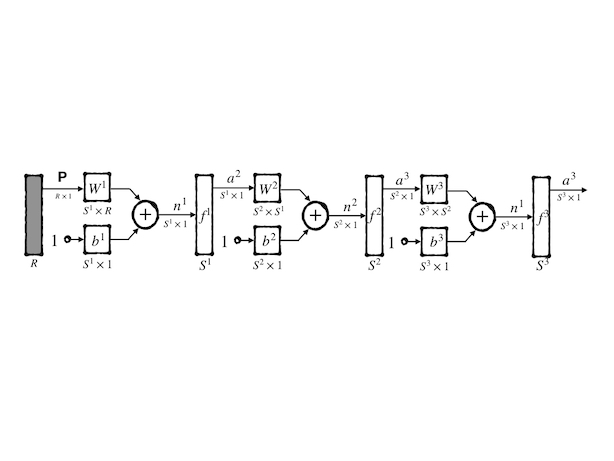 The new model with multiple layers is powerful but it is hard to design because the layer number is arbitrary and the neurons number in each layer is also untractable. So it becomes an experimental work. However, the input layer and output layer usually have a certain number and they are decided by the specialized task. Transfer functions are decided by the designer, and each neuron can have its transfer function different from any other neurons in the network.

Bias can be omitted but this can cause a problem that it will always output \(\mathbf{0}\) when the input is \(\mathbf{0}\). This phenomenon could not make sense in some tasks, so bias plays an important part in the \(\mathbf{0}\) input situation. But to some other input, bias seems not so important.

It seems possible that a neuron’s output also connects to its input. It acts somehow like

to illustrate the procedure, we present the delay block 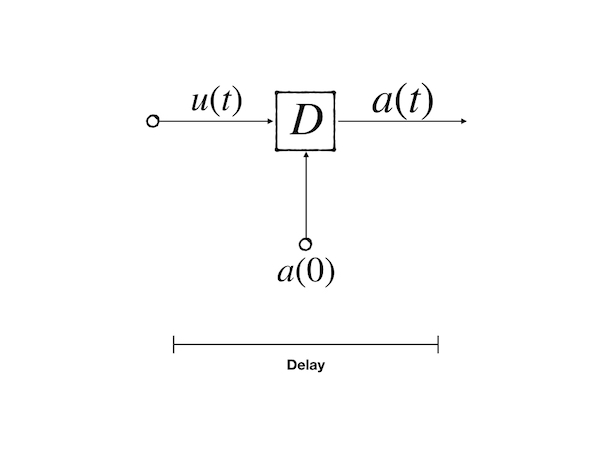 where the output is the input delayed 1-time unit:

Another useful operation for the recurrent network is integrator: 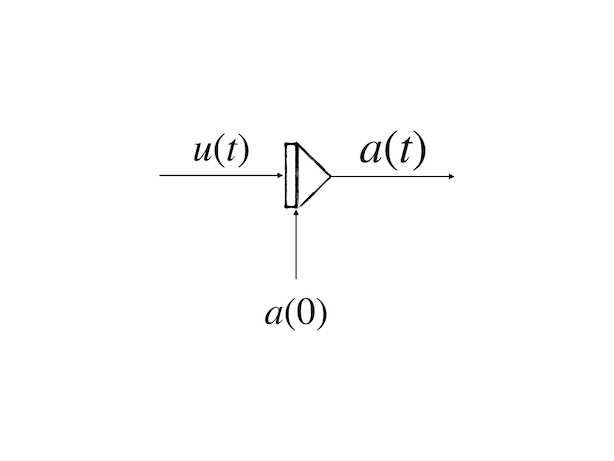 A recurrent network is a network in which there is a feedback connection. Here we just list some basic concepts and more details would be researched in the following posts. The recurrent network works more powerful than a feedforward network because it exhibits temporal behavior which is a fundamental property of the biological brain. A typical recurrent network is: 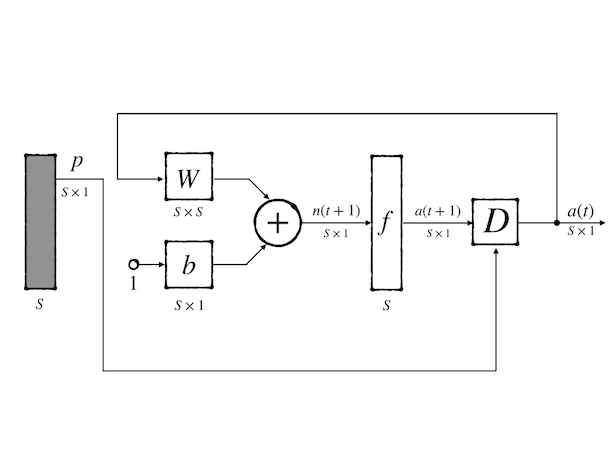