We have built some neural network models in the post ‘An Introduction to Neural Networks’ and as we know architectures and learning rules are two main aspects of designing a useful network. The architectures we have introduced could not be used yet. What we are going to do is to investigate the learning rules for different architectures.

The learning rule is a procedure to modify weights, bias, and other parameters in the model to perform a certain task. There are generally 3 types of learning rules:

A perceptron is an easy model of a neuron, and what we are interested in is how to design a learning rule or develop a certain algorithm to make a perceptron possible to classify input signals. Perceptron is the easiest neuron model, and it is a good basis for more complex networks.

and abbreviated notation with a layer of \(S\) neuron network is:

where \(W\) are the weight matrix of \(S\) perceptrons. And each row of the matrix contains all the weight of a perceptron.

In some simple models, we can visualize a line or a plane named ‘decision boundary’ which is determined by the input vectors who make the input of its transfer function \(n=0\). For instance, in a 2-dimensional linear classification task, we were asked to find a line that can separate the input points into two different classes. This line here acts as a decision boundary and all the points on the line would produce \(0\) output through the linear model.

Let’s start to study with one perceptron. 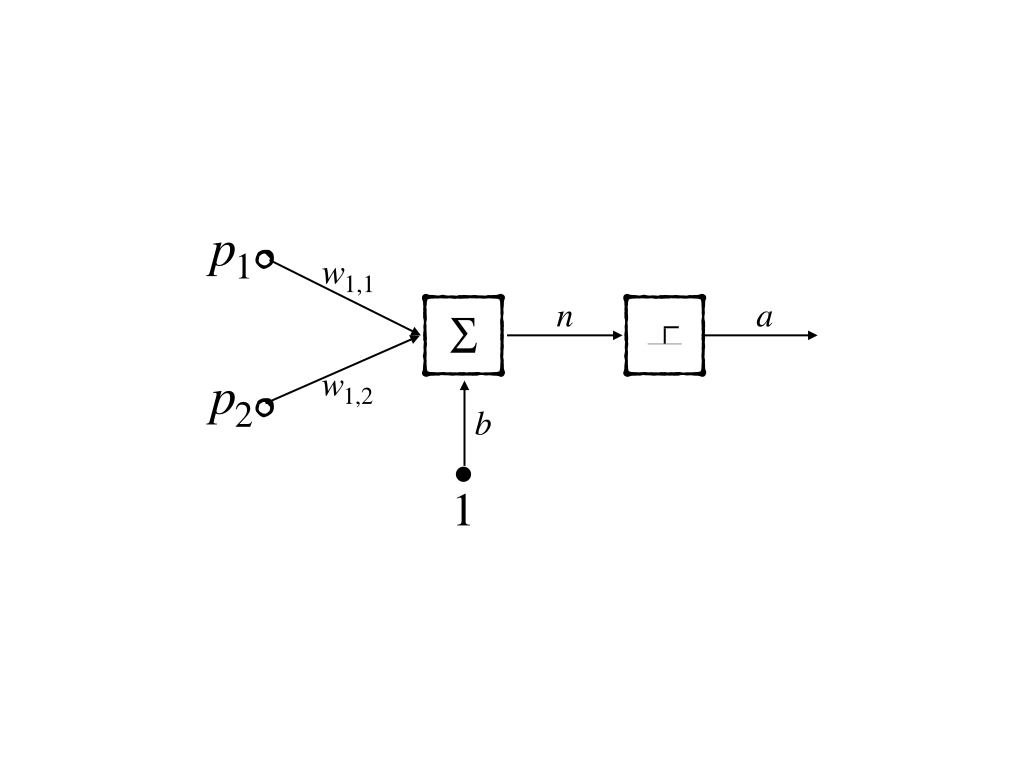 Its decision boundary is the line: 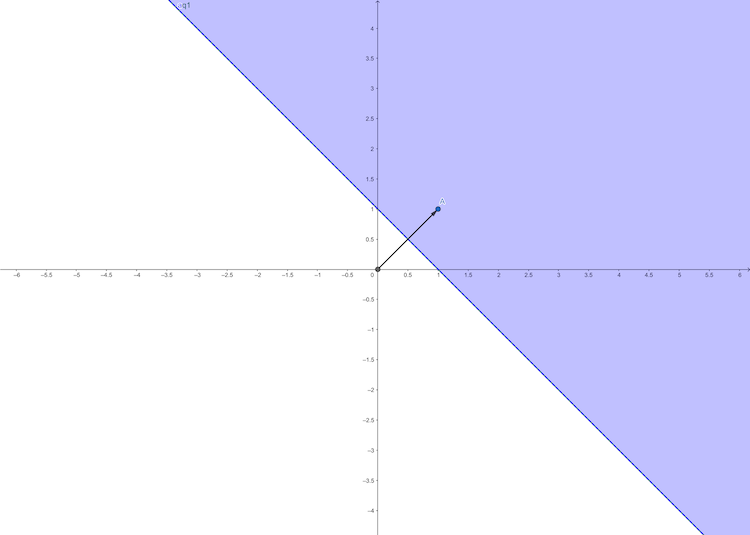 from the figure, we can conclude the weight vector has the following properties:

A multiple neuron perceptron is just a combination of some perceptrons, whose weight matrix \(W\) has multiple rows. And the transpose of row \(i\) of the \(W\) is notated as \(_iW\)(column form of the \(i\)th row in \(W\)) then the \(i\) th neuron has the decision boundary:

For the property of hard limit function that the output could just be one of \(\{0,1\}\). And for \(S\) neurons, there are at most \(2^S\) categories, that is to say to a \(S\) neuron perceptron in one layer it is impossible to solve the problems containing more than \(2^S\) classes.

With the above results we try to design the rule and assume training dates are:

To modify the model, we need the output which is produced by the weights and input. And for this supervised learning algorithm we have both input and correct outputs (targets), what we need to do is just assign some values to weights(here we omit the bias). Like:

however, the target is \(1\) so this is a wrong prediction of the current model. What we would do is modify the model.

As we mentioned above, \(_1W\) points to the purple region

Then we find that the summation of two vectors is closer to each of the two vectors. Then our algorithm becomes:

The target and output product information together to modify the model. Here we introduce the most simple but useful information - ‘error’:

so, our algorithm is

and it’s not hard to notice that \(e\) has the same sign with \(p_i\). Then the algorithm can be simplified as:

This can be easily extended to bias:

and to the multiple neurons perceptron networks, the algorithm in matrix form is: