BP algorithm has been described in ‘An Introduction to Backpropagation and Multilayer Perceptrons’. And the implementation of the BP algorithm has been recorded at ‘The Backpropagation Algorithm’. BP has worked in many applications for many years, but there are too many drawbacks in the process. The basic BP algorithm is too slow for most practical applications that it might take days or even weeks in training. And the following posts are some investigations to make the BP algorithm more practical and speed it up.

In the post ‘Backpropagation, Batch Training, and Incremental Training’, the BP approximation example had shown that the algorithm converged very slowly. BP is a variation of LMS and LMS is a variation of ‘steepest descent’. So BP is a kind of steepest descent, and the difference between them is the calculation of derivatives. Steepest descent is the simplest and the slowest, while Newton and conjugate algorithms are faster. Then inspiration comes to us whether these algorithms can be used in speeding up the convergence of BP.

Research on faster algorithms falls on rough two categories and some aspects would be discussed:

LMS guarantee to converge that minimize the MSE under the condition that the learning rate \(\alpha\) is small enough. MSE is a quadratic function that has always a single stationary point and constant Hessian. Because Hessian matrices of quadratic functions do not change, so the curvature of functions would not change and their contours are elliptical.

When BP is used in a layered network, it degenerates to the LMS algorithm. The MSE of the single-layer network is quadratic. So it has a single stationary point and constant curvature. 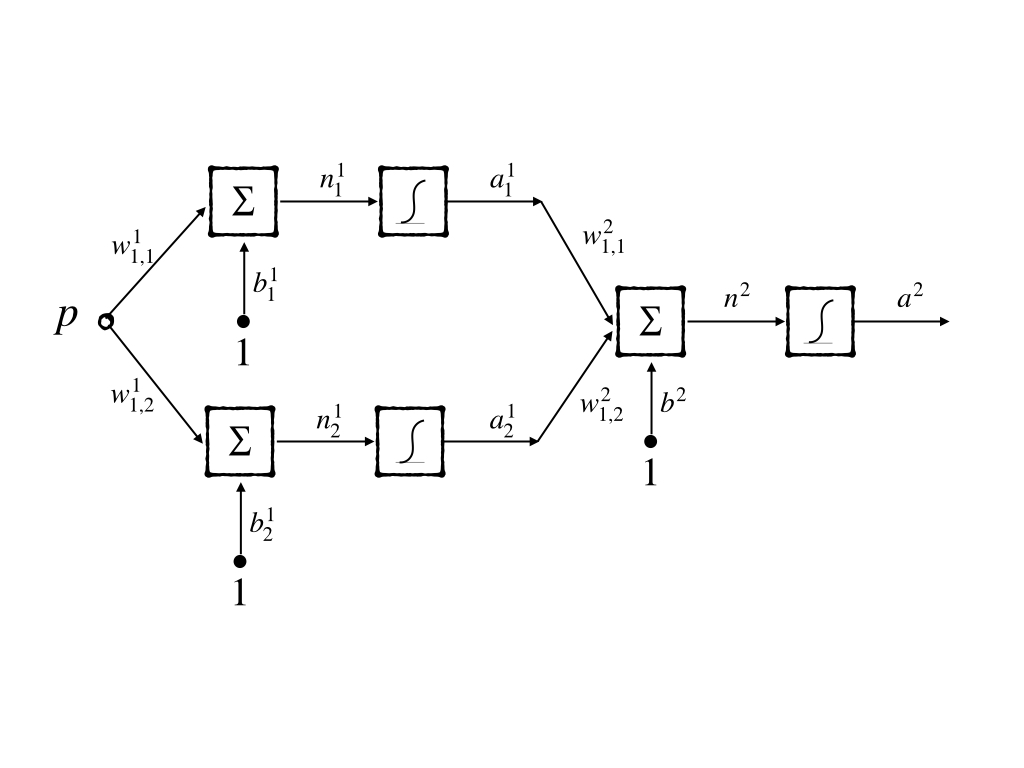 the transfer functions of both the hidden layer and the output layer are log-sigmoid functions. And in the following experiment the function to approximate has the same architecture as the 1-2-1 network and its parameters are:

Then in this task, the global minimum point is at equation(1). And in the interval \([-2,2]\) the target function looks like this: 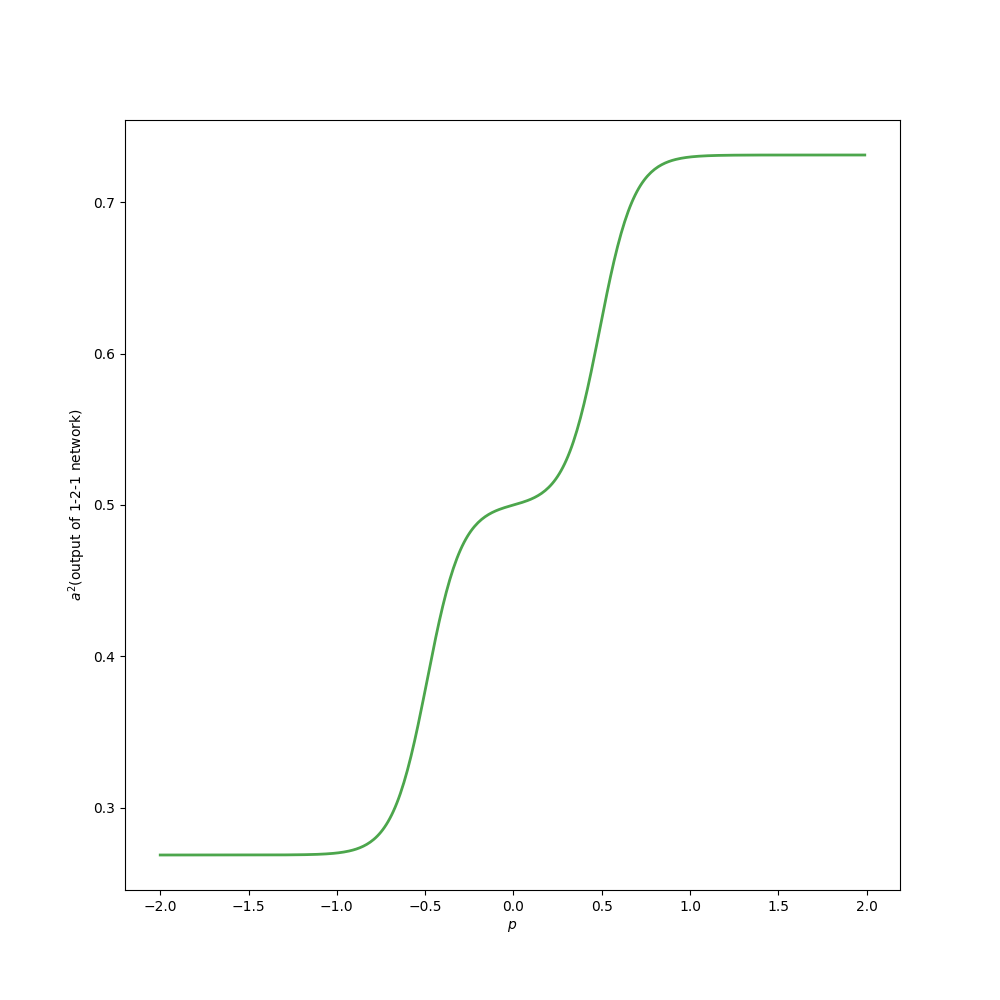 Because the target function to be approximated has the same architecture as our model, the 1-2-1 network can have the correct approximation where MSE is 0. Although this experiment is humble compared to practical applications, it can illustrate some important concepts.

To approximate the target function, we generate the inputs:

with equivalent probability and the corresponding outputs. The performance index is the sum of square errors which equals MSE. 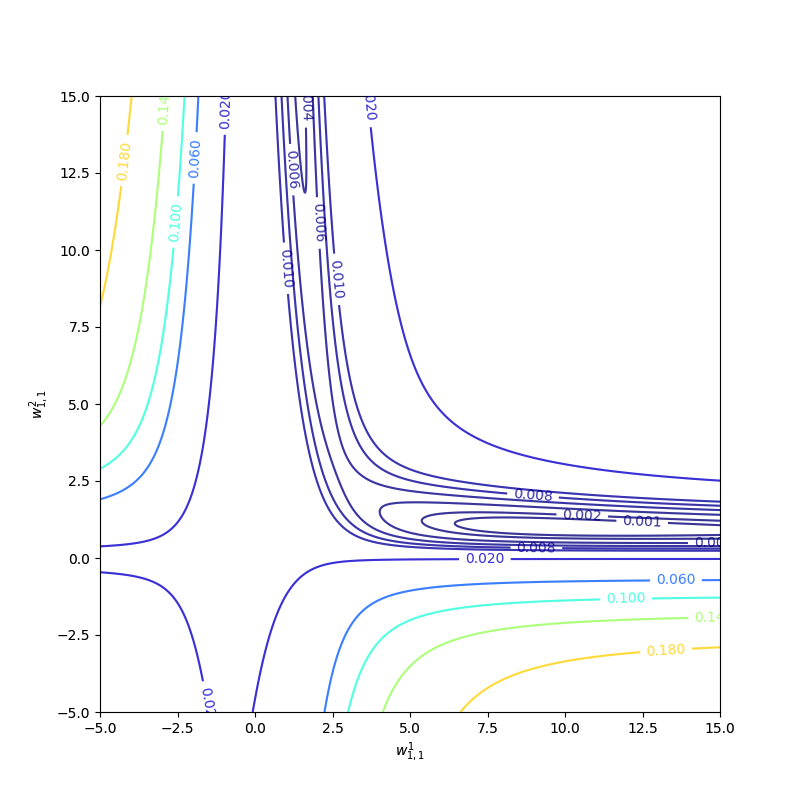 The performance index is not quadratic. Then it has more than one minimum, for instance, \(w^1_{1,1}=0.88\) and \(w^2_{1,1}= 38.6\), and solution (1) is also a local minimum of the performance index. The curvature varies drastically over the parameter space and a constant learning rate can not suit the entire process. Because some regions are flat where a large learning rate is good, and some regions of curvature are steep where a small learning rate is necessary. The flat region is a common condition when the transfer function of the network is sigmoid. For example, when the inputs are large, the surface of the performance index of the sigmoid network is very flat. 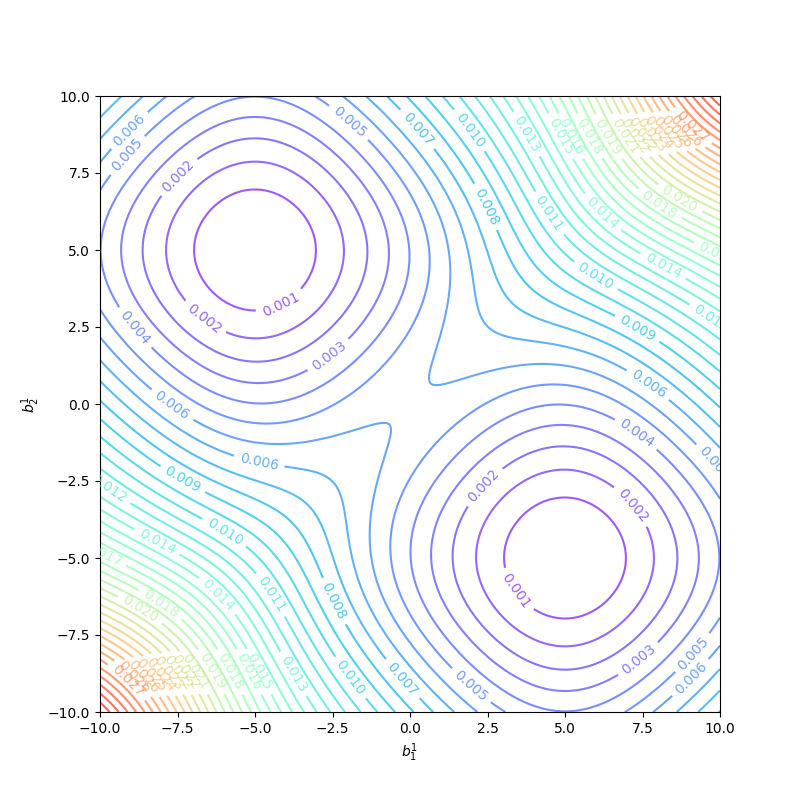 So \(b^1_1=0\) and \(b^1_2=0\) are not good initial values. And if initial values of the parameters were large, the learning algorithm would start at a very flat region, this is also the nightmare for most algorithms. Trying several initial guesses is also a good idea but when the whole training process needs days or weeks this method is impractical. A common method for initial parameters of networks is using small random numbers as a random number between \(-1\) and \(1\) with uniform distribution.

It takes a long time during the flat region and the entire process takes more than 300,000 epochs. And the sum of the square error of the performance index is: 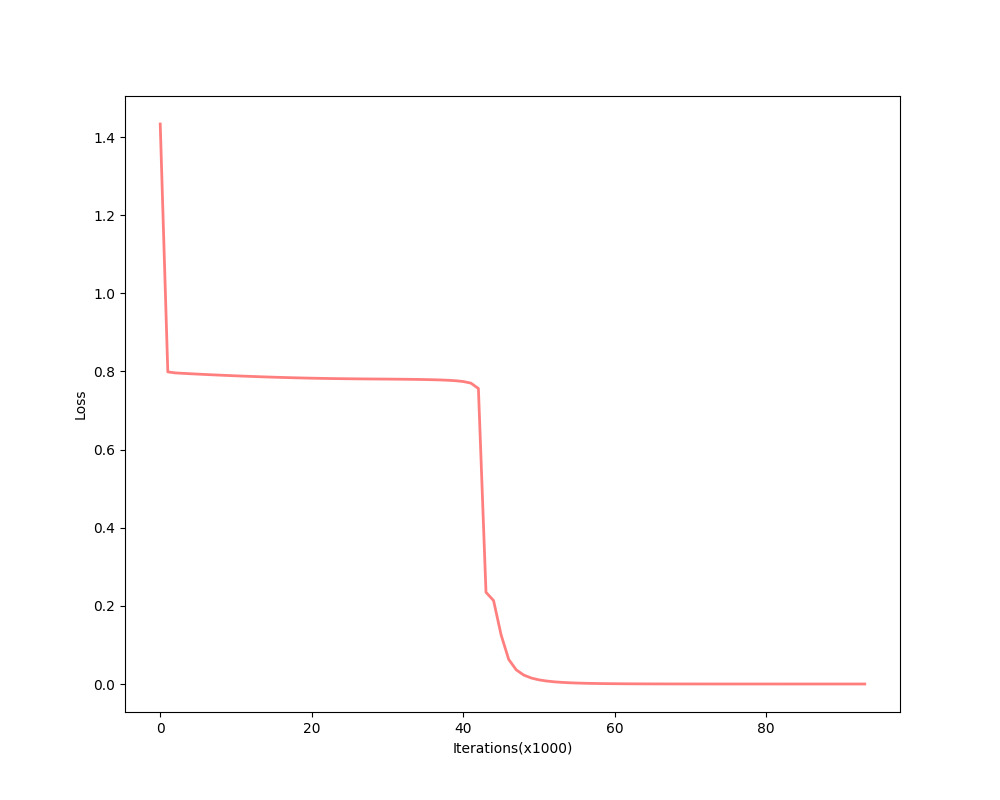 The flat region takes a great part of the whole process.

It converges to another local minimum point but not the global minimum. And the sum of the squire error of the performance index is: 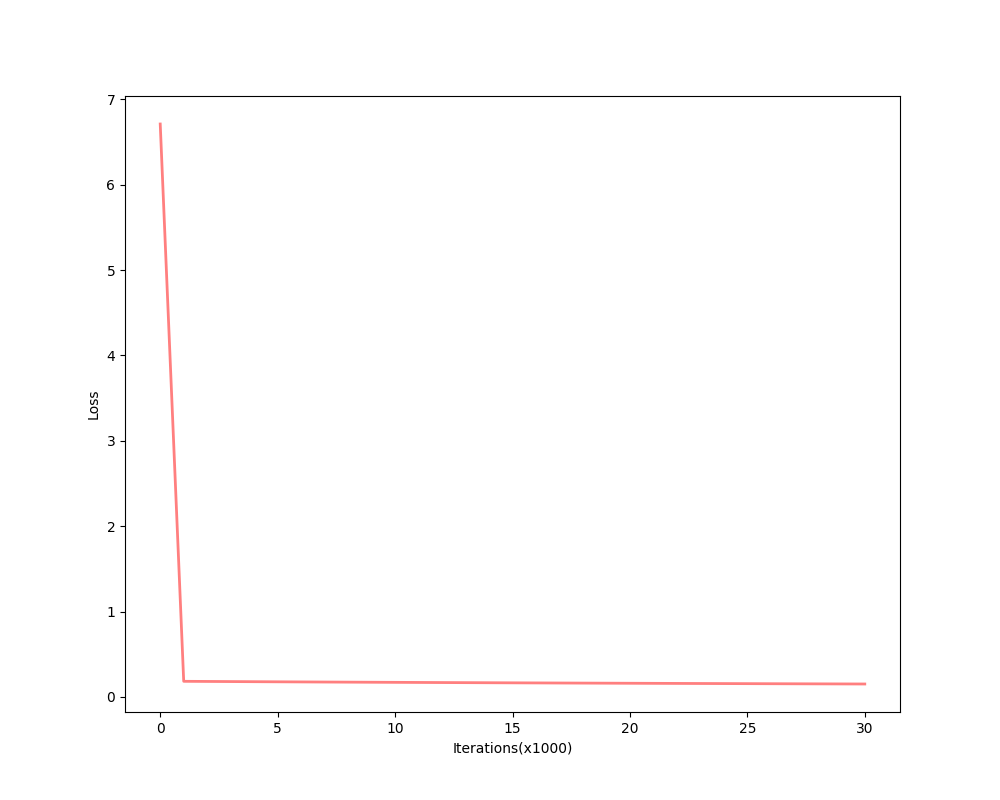 whose final point can not reduce error to 0.

and its error is not decrease after some iterations: 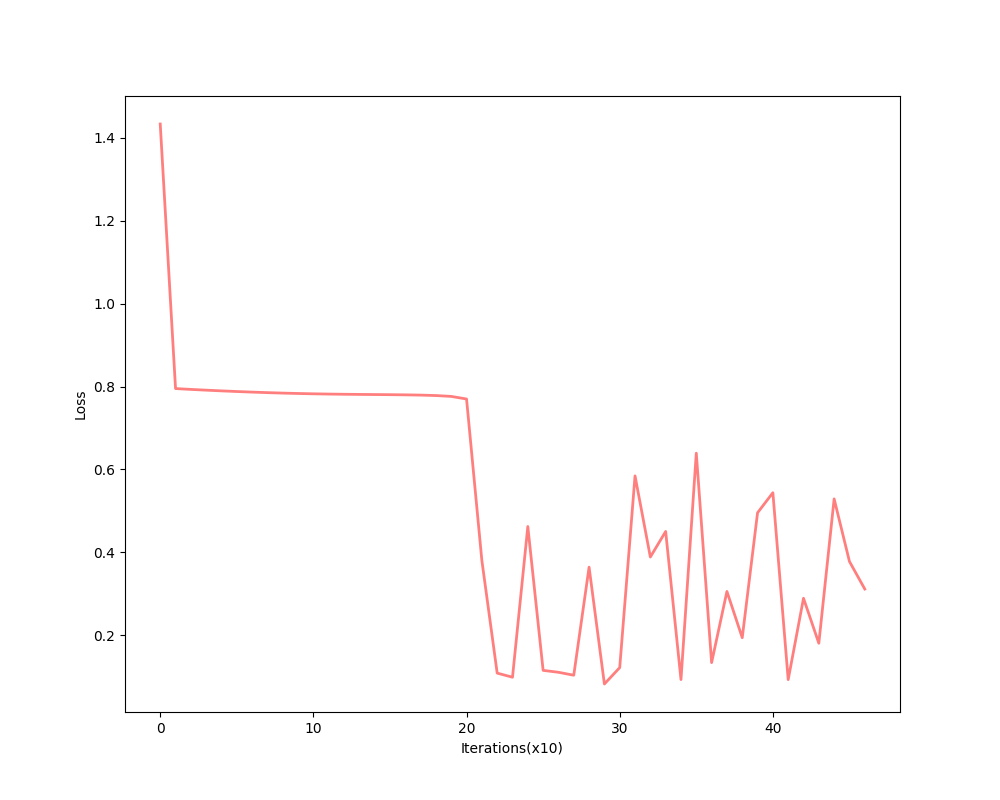