In both LMS and BP algorithms, the error in each update process step is not MSE but SE \(e=t_i-a_i\) which is calculated just by a data point of the training set. This is called a stochastic gradient descent algorithm. And why it is called ‘stochastic’ is because error at every iterative step is approximated by randomly selected train data points but not the whole data set. It is also called ‘online’ learning when each time step a data point is used and ‘online’ data is always coming to us. And each one can be used independently by the algorithm. So incremental training is also a name for this process.

When we use the whole data set to approximate the error, this is called batch training. This algorithm calculates gradient after all inputs are applied to the network before parameters are updated. For example, when all inputs have equal probability, the mean square error becomes:

Rather than changing MSE into SE, this just replaced the MSE with the average of the whole training set error. A statistics professor at MIT said: ‘what our statisticians do every day is replacing expectation with average’. This average is closer to the MSE than SE is. Then the total gradient is:

Then the update step is converted to:

Building a toy BP program is a good way to go deeper inside the algorithm. The details of the design of the algorithm could be found in ‘The Backpropagation Algorithm’. And the task is consist of three essential parts:

How many layers and how many neurons are necessary for a certain task is the key point in designing a network. For instance, to approximate the target functions 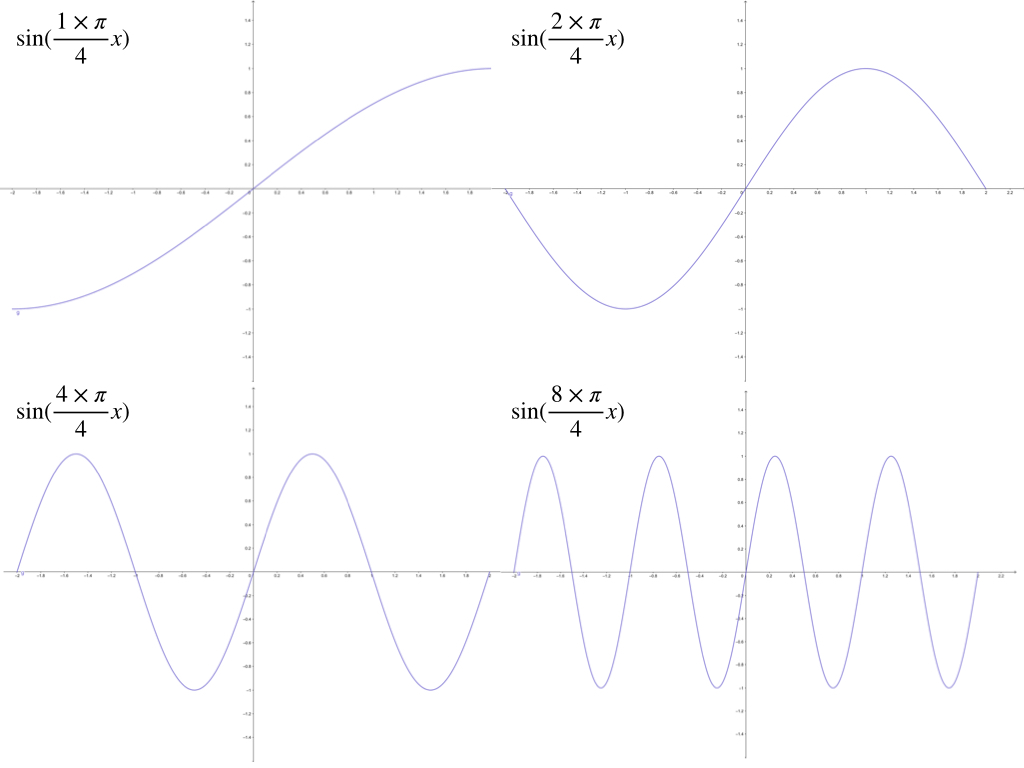 The architecture we used here to approximate four functions is a 1-3-1 net. And the BP algorithm is used.

The four final approximate results of these for the function are: 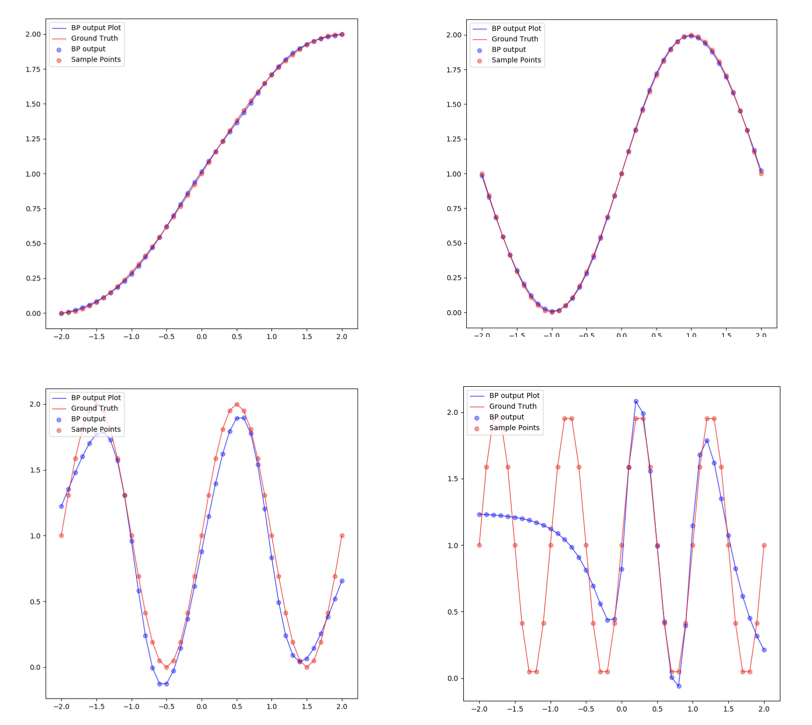 And the final results of these four networks are: 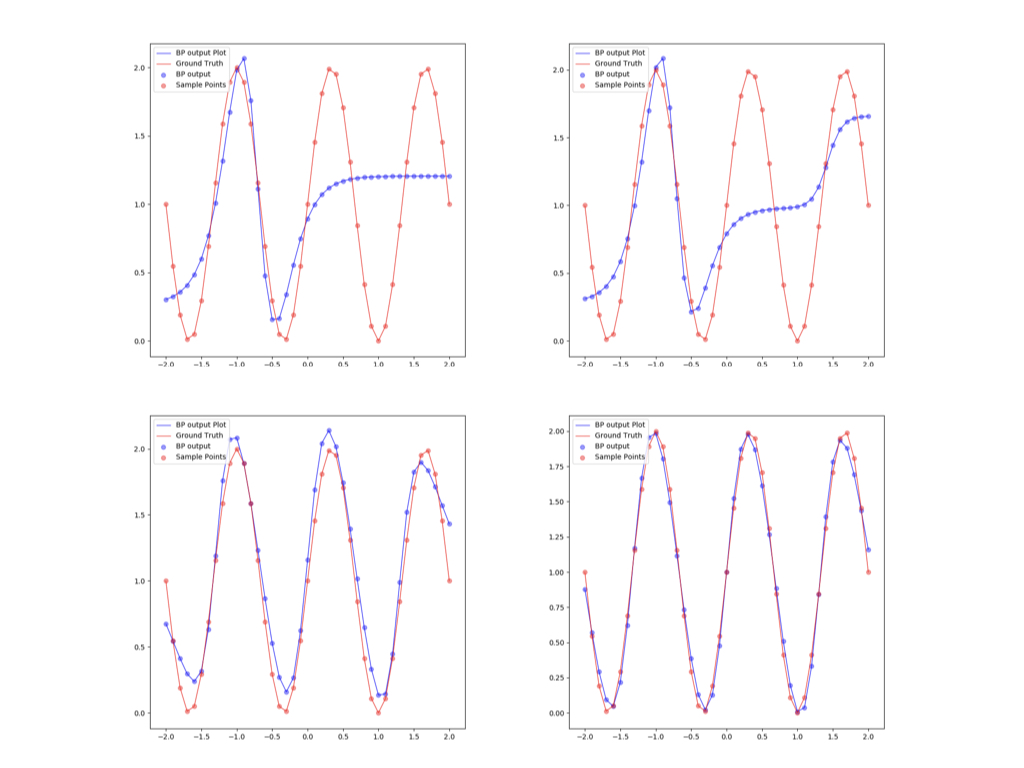 Summary of the comparison of the results of the four different networks are:

When the training algorithm did not converge to the global minimum, the responses of the network can not give an accurate approximation to the desired function. This is just because the BP algorithm used here is not like LMS it worked under the condition that the performance index function is quadratic and it has only had one minimum. The performance index of multiple layers network has a lot of local minimum and saddle points also affect the convergence of the algorithm.

BP can not guarantee convergence to the global minimum. Many factors can affect the process. And now let’s observe the different initial values of the parameters of the network which lead to different local minimums of the performance index:

Convergent to a local minimum#

and the process of the algorithm is:

the descent process of MSE is: 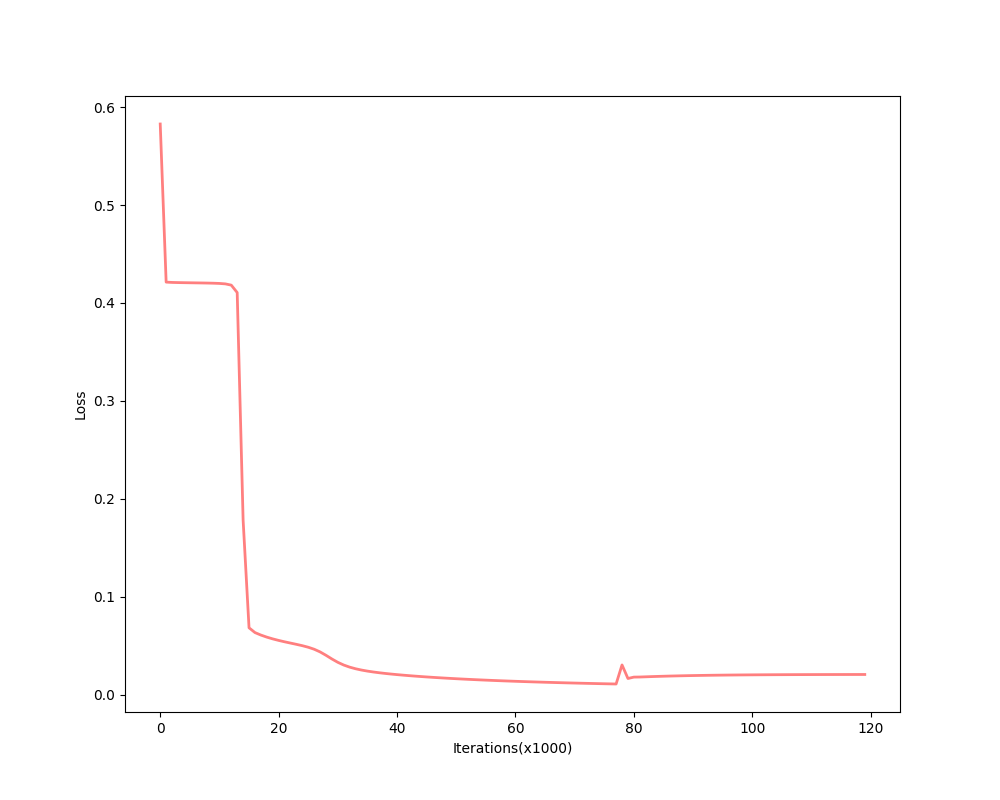 and the final converged parameters:

Convergent to another local minimum#

and the process of the algorithm is:

the descent process of MSE is: 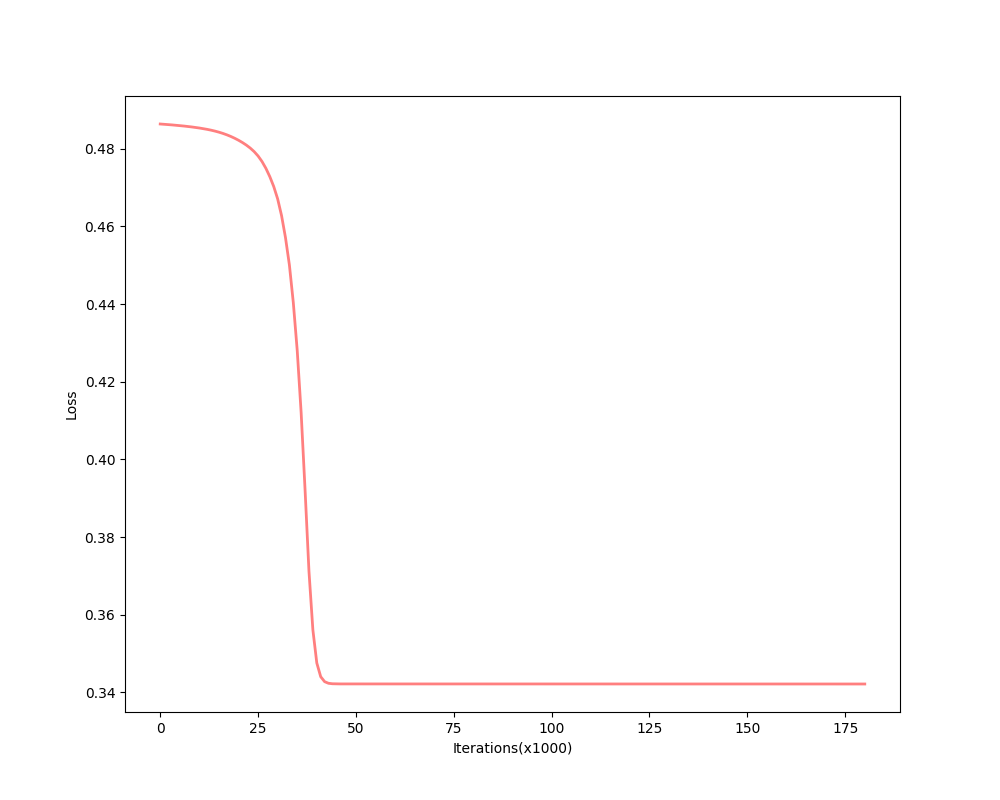 and the final converged parameters:

For we have only a finite number of training samples(examples of proper network behavior) which means our task is approximating the function that has more input/output pairs than we used in training. And the behavior of the model to the inputs which were not used in the training process is called generalization. For instance, the target function is:

1-2-1 gives a good generalization that is when the points are not used in the train, the blue line is also close to the red line:

However, a more powerful network, a 1-9-1 network gives a closer approximation than the 1-2-1 network at training points that the blue circles are close to red circles. But at other points, which are not used in training, represented by the blue line is far from the ground truth. This means 1-9-1 gives a bad generalization:

This is called ‘overfitting’.

the summary of these two experiments is: 1. usually, parameters in the model should be less than the number of points in the training set(this can also be described as the number of training data should be more than the parameter in the model) 2. Ockham’s Razor is a good rule in future work of neuron network design: when the smaller networks could work, a bigger network is not necessary.